Today Mr. H & I went to hear the mass. Its a humid afternoon and I’m constipated, but we went as devotion to thank God for the blessings of the past week. We were, after all, spared from the disaster brought by heavy rains in the northern part of the country. Our trainee and helper also arrived, giving us an extra hand and allowing me to break my weekly oDesk working hours recorded, doubling this week’s earnings. We also won a fairly huge bid from one of our clients and my UTI is cleared (for now). There’s much to be thankful about!

Cebu is cradle of Christianity in the Philippines. Home of Sto. Niño, the Sinulog Festival and strict Catholic church values. We were just in time for the priest’s sermon. I remember one of the Bible verses we were able to study back in high school. It was when Jesus summarized all of the commandments into two – 1) to love the Lord our God, with all our hearts and mind, and 2) love your neighbor as yourself (Mark 12:30 & 31). The mass was delivered in Cebuano and I’m quite amazed that I could somehow follow with what he’s preaching. However, I was lost in a sea of confusion when everything led to the issue of RH Bill.

The Reproductive Health Bill has been a source of controversy and debate amongst politicians and the Catholic Church. President Aquino was so vocal in promoting the bill that he got his fare share of criticism, as well as those senators and congressmen who were the main proponents. In an overpopulated country composed of a majority of poverty-stricken families who depend on the Conditional Cash Transfer Program of the government, PNoy saw it as THE solution which would cause the vital turning point of our society like those among our neighboring countries. In fact the UN says that the Philippine’s economic progress would be hindered if this wouldn’t be made into a law. I’m not a PNoy fan but I commend his effort in promoting this despite the bullying of the church. (Well, until his SONA wherein he referred to it more modestly as RESPONSIBLE PARENTHOOD BILL. But, whatever!)

BULLYING! Yes! Numerous heads of the church have been vocal about opposing the bill, saying it hinders the right to life. They have this interpretation that abortion would be legal and thousands of children would be put to death even before they’re conceived. Everyone has a right to life they say. This is biblical they furthermore emphasize. More precisely, the priest even mentioned during the mass that it is WRONG TO TRUST THE CONDOM rather than to TRUST GOD. I know I was in church but I couldn’t help but utter some negative thoughts in my head. (Forgive me Lord).

I am disgusted at the negative notion they made of contraceptive options offered by obstetricians and family doctors. That these pills and devices are unsafe. I shake my head. I bet there are church attendees on their pills and IUDs. True there are risks, but that’s why there are also options. Its up to the couple to choose where they would be most comfortable with. Then there was the doubt of politicians making profit out of the funds to be allotted in the program. There would always be shadows like that. But if we wouldn’t start now, when are we going to place a belt on our hungry populace?

I think every mother in the congregation knows the hardship of raising a child. Anyone who came from a large family of 4 to 12 siblings know the challenges. I am even more disgusted at the mention of a text message (probably forwarded from priest to priest) wherein they warned that last week’s calamity was God’s way of punishing PNoy, even referring to the sins of the people which pushed God to cleanse the world through the flood. Even Pro-RH Bill Catholics weren’t spared. How discriminating after preaching to Love your Neighbors as yourself. I can’t stand to listen any further. Everything else that followed were lambasting of senators and politicians who were vocal on supporting the bill. This isn’t about Love the Lord your God and Love your neighbors. I was expecting that they would be expounding more on that. For the longest time, I think I missed our high school bible studies and the 2-hour Sunday service of the protestant church. 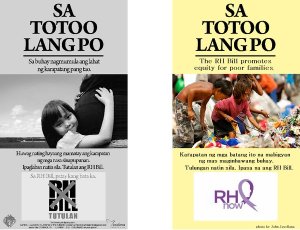 One of the many Pro and Anti RH Bill poster floating around Facebook.

…I don’t know if all the bishops and the priests met together and discussed to have this on agenda this Sunday’s Mass on all churches in the country. But I’m not buying it. I may share the same faith with Jesus but I am entitled to my own civil beliefs. I wouldn’t blame August 7th’s flood to PNoy and spread this chilling prophetical coincidence over the trauma suffered by our fellowmen. In scientific terms its the Law of Cause and Effect. An overpopulated community just happened to occupy and illegally settle along the waterways of Luzon, threw garbage and made obstructions. Collectively over decades, this disaster is going to happen. And it will continue to happen if we wouldn’t decide on a solution. Come to think of it, where was the voice (and funds) of the Catholic Church when all of the flooding happened?

Now there’s this what we call the separation of the Church and the State mentioned in our Basic Philippine Constitution class. Lawmakers shouldn’t bother with the Catholic church, but I’m seeing this manipulation over the Catholic congregation that they’re trying to impose. We are even requested to utter a prayer against RH bill before the mass officially ends. I JUST CAN’T PRAY AGAINST IT!

In the end, these priests and Catholic minions are stressing that THE 2013 ELECTIONS is near and they have power to influence over people’s votes. I beg to disagree though. The Catholic vote will always be diverse. Only INC maintains a solid opinion in electing leaders. So for those congressmen and senators who’re going in circles and letting themselves be bullied by the church – I’M PRAYING THAT AS GOD FEARING INDIVIDUALS, YOU VOTE FOR THE BENEFIT OF YOUR CONSTITUENTS. Those who are suffering from ignorance of choices in proper family planning, safe sex and unexpected pregnancies. As leaders of our country, know that the only victims of the failure to pass this bill would be the children born out of this illiteracy. Unplanned, unwanted or unexpected children born again and again to live regretful misery of poverty and hunger.

Oftentimes, I have critics who’re disgusted when I tell them I don’t know THAT person who shares the same surname/middlename/maiden name as mine. I really don’t bother browsing through family history to trace whether we’re related or not. Some INSIST I should, because we COULD BE FAMILY. Well I beg to disagree. Being RELATIVES and FAMILY has quite a stark contrast in my philosophy.

FAMILY in the Filipino sense is always nuclear – something that extends beyond places, dialects and regions. Maybe that’s why some people push me into looking through the (family tree) and locating how some stranger is related to me. I just don’t buy it. Another product of my cynicism is a harsh realization at how some ‘relatives’ take advantage of that connection depending on your occupation. Like when my dad used to be in active police duty and even now as my mom works in the justice system. I do empathize with relatives in really dire situations. Heck, we help out friends and neighbors when they’re in need. But sometimes, relatives just recognize you when you’re needed. People think sharing the same name and blood thickens the connection and puts a special ring of importance. It doesn’t.

Sometimes, there are friends who are more like family to you than your own relatives.

As common in most groups of people, not everyone likes everyone. When you don’t do anything, something’s gonna be thrown behind your back. I don’t really care.

Possibly the worst I was told, was that one person who shares my maiden name is quite a problem in their community. That’s the problem. You introduce yourself to me as a relative (my husband’s side), and you ask me if I know this person because we share (my maiden) name. And then you tell me how he/she is a nuisance around your neighborhood. Well, I don’t know him/her and neither do I know you. But don’t follow up your statement as if you’re trying to generalize the people I share my name with.

Because like me, you are also a part of a nuclear family of relatives – known and unknown to you, who could be problem people (addicts, rebels or thugs) equally adding a negative connotation to your brood.

For me, a Family is that group of people you’re comfortable with, who accepts you as you are (despite brutally knowing your flaws), who unconditionally stays with you through good and bad, and those who just doesn’t bother keeping up with you no matter how distant you’ve been, how you’ve changed and even after that – they don’t treat you any differently. No need to remind you of how bad you’ve been in the past, or how you did something to smear the name of your family. They say we don’t choose who becomes our family. I say we do. We choose the people we want to keep up with, bear with and live with unconditionally. And that makes the difference of being a ‘family’ and a ‘relative’.

This popular soap on TV, Walang Hanggan, shows the essence of being relatives and family. A grandmother who gave away her grandson heartlessly, and decades later begs for forgiveness upon realizing how deserving that grandson is of recognition. (He became successful, wealthy and equally rich as she is). And there’s the other grandmother who kept this unwanted grandson, raised him as her own child, wept when he was lost and rejoiced when he was found. That simple. 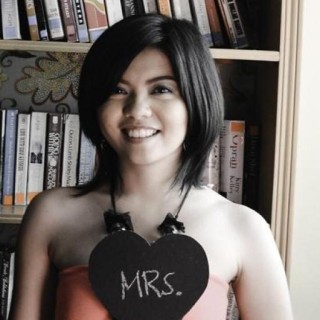 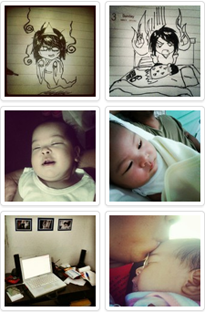 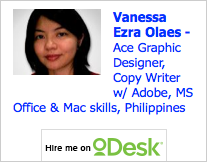